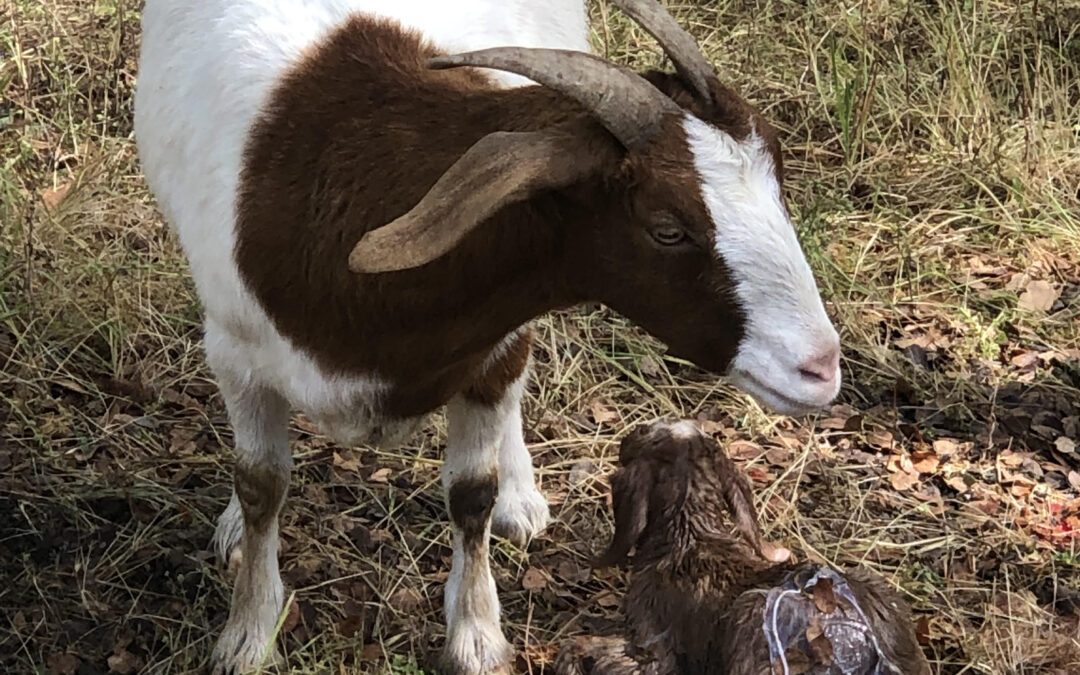 A small herd of goats was recently delivered to the Oak Creek Commons “10 Acre Woods” to chow-down on the plethora of grasses and weeds growing in the natural woodlands.  With the aim of reducing the danger of wildfire, the goat herd has grown from an initial eight, then to 14, then to 19, with the birth of five kids.  Needless to say, viewing the goats has become a most popular pastime.Bob Hoteling, 18-year community resident, is a member of the OCC committee that manages the wooded area made up of massive oak trees and grasses, and a couple of small, intermittent streams.  The area looks much as it did in California’s earliest days.

“The undergrowth is a mixture of native plants and aggressive European grasses that have been brought in over the years,” said Hoteling.  “We’ve performed a lot of annual weed-whacking to keep the brush down, but this is the first time we’ve tried goats.”

OCC resident Toni Avina arranged with a local goat-herder to bring a small herd of goats to graze in the woodland, which he was happy to do. He fenced off about half the woodland then brought in the goats.

Excitement spread through the community when the goats arrived, with people watching as they ate and played.  That excitement ramped up considerably about a week later when the goats got out of the fenced area through a culvert and sauntered into a nearby neighborhood.  OCC residents quickly rounded them up, though all were neophytes at working with goats.  They dubbed themselves the “Goatbusters.”

Even more excitement occurred a few days later when two mother goats gave birth to two sets of twins.  The babies were on their feet within one hour of being born and were inseparable for the next several weeks.  Another kid was born several weeks later.

A number of folks from the community watched the births taking place from outside the fence, most having never seen anything like it.  Most walked away slowly shaking their heads, knowing they had seen something intimate and wonderful.

Eight-year resident Larry Edwards viewed the newborn goats within minutes of birth, watching as one struggled to stand on his new legs.

“The baby was stumbling around and I worried that he wasn’t up to it,” he said.  “I was really thrilled to see it, for everything ended up fine.”

Daily life has changed for he and his wife, Jean, for their home is situated next to where the goats spend much of each day.  The couple used to set aside time each morning for meditation, with their eyes closed.  Their new habit is to spend each morning with eyes open – watching the goats.  Edwards points out that two more are pregnant.

It is currently unknown how long the goats will remain, for plenty of succulent undergrowth remains to be eaten.  One month, two months, or many more, who knows?  At any rate, OCC’s residents can look forward to many more happy weeks of watching! 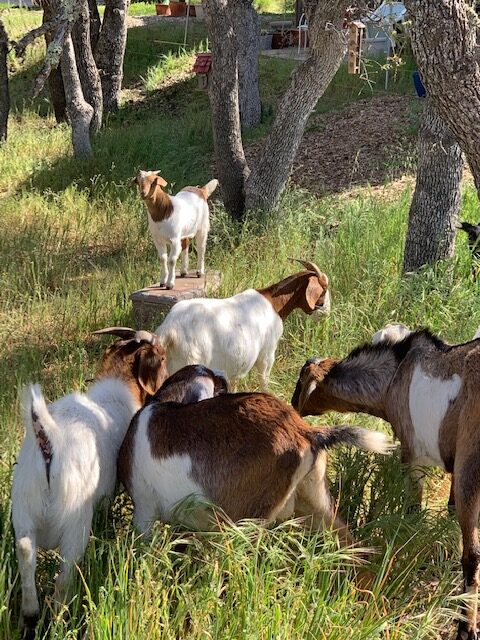 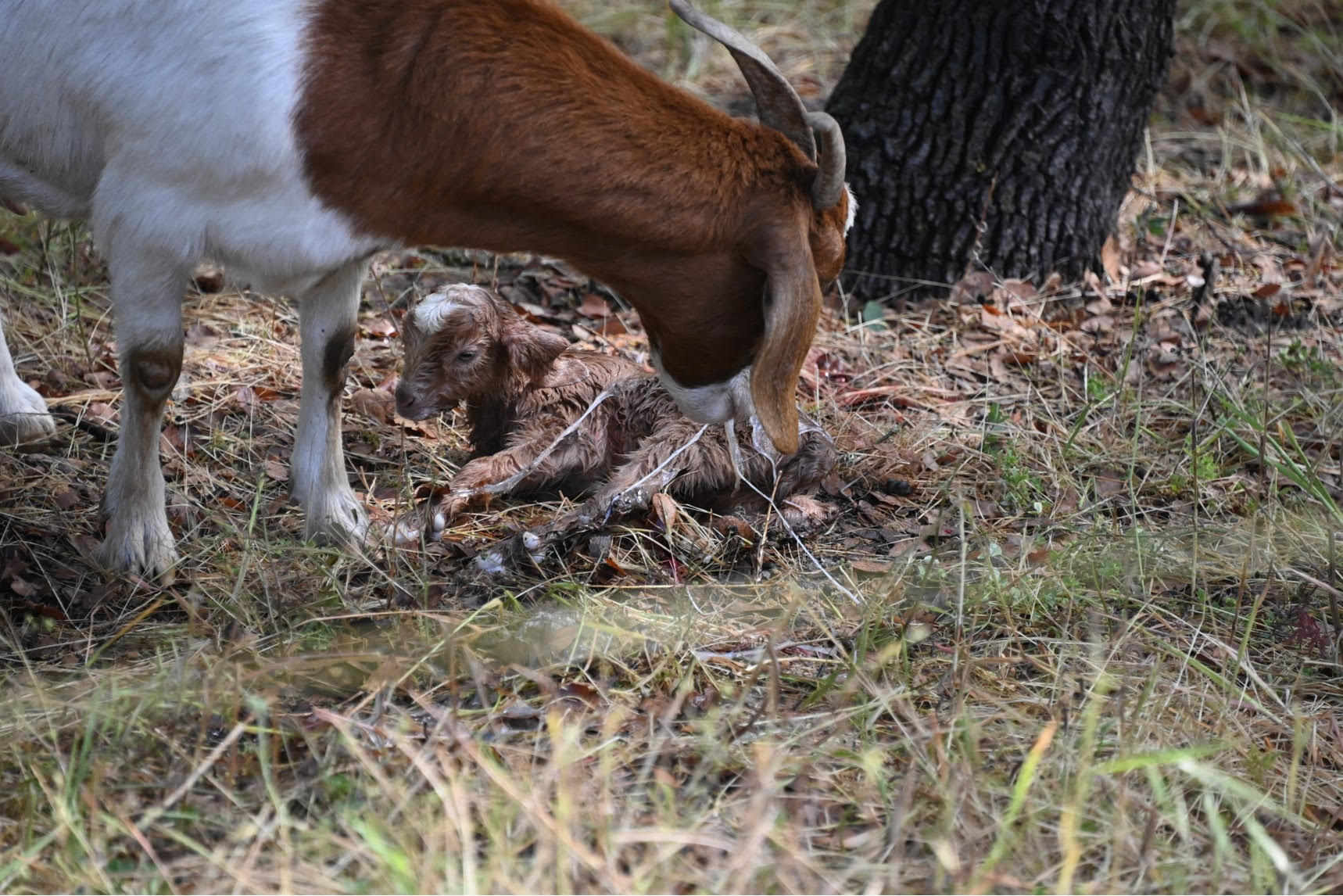 Oak Creek Commons is a Multi-generational Intentional Community located in Paso Robles (pop. 29,000) on the central coast of California, halfway between San Francisco and Los Angeles. A 30 minute drive south gets us to San Luis Obispo and a 35 minute drive gets us to the Pacific Ocean.

We intentionally designed our cohousing neighborhood to foster community while preserving privacy and independence. The physical layout of the neighborhood makes it easy to know everyone in our 36-household community.

We share in planned & spontaneous social activities, community meals, child-care — as well as, self-managing & maintaining our property. We are known for helping our fellow neighbors when in need. A Caring and Safe Neighborhood

Oak Creek Commons consists of 31 condominiums and 5 single-family homes situated on over 14 acres — with more than 10-acres of undeveloped oak woodlands. Living here has the feeling of a small village where children safely play and grown-ups know and care about each other. Our dogs, cats, & chickens love it here, too! The layout of our community offers a more friendly and safe environment for kids & adults. We have multiple play spaces and places to gather, front porches facing the walkway, and cars parked away from homes. Interested in Living at Oak Creek Commons? Come Visit Us! We welcome you to visit us and discover firsthand how our Cohousing community might work for you. Join us on a Community Tour where we’ll answer your questions, show you the common areas, and share our experiences about living here.